London Buses Route 183 is a Transport for London contracted bus route in London, England. Running between Pinner and Golders Green, it is operated by London Sovereign RATP.

Route 183 commenced operation on 3 October 1934 between Northwood Garage and Golders Green Station via Pinner, North Harrow, Kenton, Kingsbury and Brent Green. The route was initially operated by London Transport from their Hendon (AE) garage using Leyland Titan STDs which were in turn replaced in 1953 by the AEC Regent III RTs.

In 1935. LT-type buses were introduced and part of the allocated was transferred to Harrow Weald (HD) garage.

In 1975, the route was converted to one person operation using Daimler Fleetlines.

In 1978, the route also swapped with Route 83 in the Hendon area running via The Bell instead of Hendon Central Station.

In 1980, the Daimler Fleetlines were replaced by MCW Metrobuses.

In 1987, the Hendon (AE) garage was announced closed and the allocation was transferred to Harrow Weald (HD) garage and the Daimler Fleetlines were reintroduced. At the same time, the route was extended from Northwood station to Harrow Weald for garage journeys.

In November 1987, the route was withdrawn between Pinner and Northwood except for school journeys to Northwood Hills. The Daimler Fleetlines were replaced by MCW Metrobuses and Volvo Ailsas at the same time.

On 29 January 1991, the Volvo Ailsas were withdrawn and was converted to full MCW Metrobus operation.

In September 1999, the route was passed to London Sovereign operating from their Harrow (SO) and Edgware (BT) garages and was converted to low floor single deck operation using brand new Plaxton Pointer 2 bodied Dennis Dart SLFs.

On 18 January 2014, the frequency was increased and Plaxton President bodied Volvo B7TLs were reintroduced.

On 25 July 2015, part of the allocation was transferred to Harrow (SO) garage.

On 8 October 2016, a half hourly weekend night service was introduced.

On 6 January 2018, the Edgware (BT) allocation was transferred to Harrow (SO) garage and was converted to full Scania OmniCity and Wright SRM bodied Volvo B5LH operation.

Routes 183 operates via these primary locations: 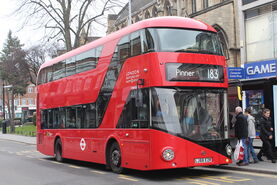 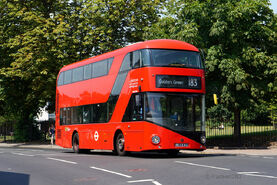 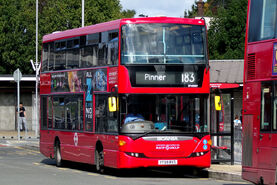 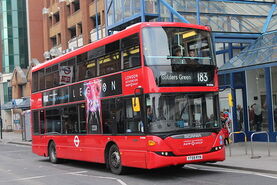 Add a photo to this gallery

Retrieved from "https://bus-routes-in-london.fandom.com/wiki/London_Buses_Route_183?oldid=42562"
Community content is available under CC-BY-SA unless otherwise noted.